Full of character and beautifully restored, this dirt-track special is a unique piece of early American motorsport history.

This 1928 DeSoto Special is a charming example of the sort of car that would thunder around the fairgrounds dirt-track scene in the late 1930s. This gorgeous special is a beautifully restored car in period appropriate livery that captures the essence of early American motorsport in its wide stance and purposeful, pared-down appearance. While many of the cars from this period were fitted with ubiquitous Ford engines, this car is unusual in that it features Chrysler flat-head six-cylinder power. The 170 cubic inch Chrysler six might not seem like the obvious choice for a dirt-tracker, but this compact flat-head six was good for 45 horsepower in standard DeSoto trim, and was similar to the engine that powered the Chrysler Model 72 to a surprising 3rd place finish at LeMans in 1928, so there is little doubt it was up to the task. For race duty, this example sports an Edmunds dual-carb intake topped by twin Zenith carburetors. Exhaust is expelled through a single chrome straight pipe which has developed some pleasing bluing numerous heat cycles. The little six sounds just fantastic in this configuration, emitting a baritone bellow from the straight exhaust. We can only imagine how great it would sound at full chat, kicking up a rooster tail of dirt as it slides around a flat-track at speed. 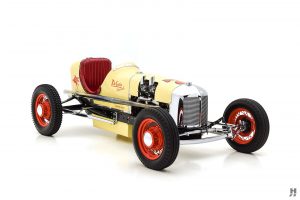 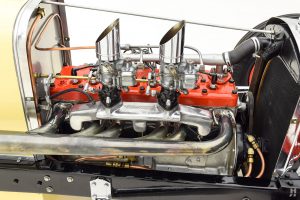 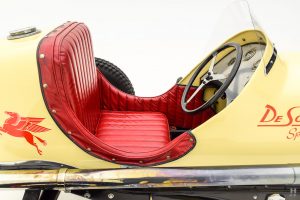