A charming Rolls-Royce 20 HP with unique, one-off coachwork by Seegers et Sohn of Leipzig, Germany. Well-documented history, and a cherished part of the same family collection since 1963. A proven veteran of dozens of CCCA and RROC touring events.

Rolls-Royce factory records show that chassis GAJ37 was sold new in Germany and finished by Seegers et Sohn of Leipzig with what was described as a “sporting” cabriolet body. While this coachbuilder is not widely known today, they created a small number of exclusive, high-quality bodies on prestigious chassis including Horch and at least one other Rolls-Royce. The body on GAJ37 is beautifully constructed, with well-judged proportions and many intriguing details. The deeply skirted front wings and integrated trunk pair with a low roofline for a distinctly sporting profile. Accompanying documents list the original owner as a Mr. Otto Schindler, also of Leipzig, who took delivery on October 9, 1928. During World War II, GAJ37 remained in Germany, eventually making its way to Hamburg. In the years immediately after the war, it was used by several British military officers before being acquired by a dealer from Wisconsin. Once Stateside, the car was sold to Mr. Frederick Hart, a well-known enthusiast of early Rolls-Royce motorcars based in Grosse Pointe, Michigan. 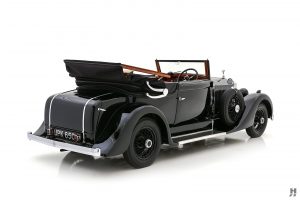 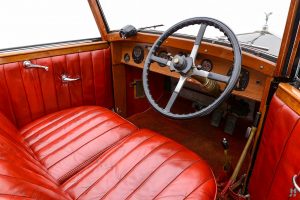 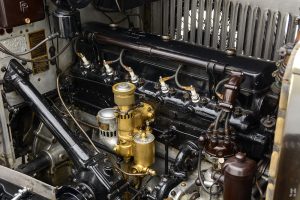