A rare and imposing flagship model from the penultimate year of Locomobile production. Reportedly sold new to company president Cliff Durant, son of Billy Durant. Acquired from the Durant family by M.L. “Bud” Cohn in the 50s, and in single ownership since 1976. An incredibly well-preserved and powerful CCCA Full Classic, eligible for numerous events worldwide.

On offer is this marvelous and exceedingly rare Locomobile Model 90, wearing original and distinctly sporting dual-windshield “Sportif” coachwork. It is one of two examples believed to exist, and it is presented in wonderfully preserved condition, having had just three owners in ninety-three years. According to the 2nd owner, the respected early collector M. L. “Bud” Cohn, this car was special ordered for Russell Clifford Durant. The son of William C. Durant, Cliff was an accomplished racing driver, musician, and yachtsman, and he served as Locomobile’s President at the time this car was built. The powerful and stylish Sportif was undoubtedly a suitable machine for a wealthy playboy like Cliff Durant. Mr. Cohn reportedly purchased the car directly from the Durant family at some time in the early 1950s, not long after Billy’s death. It remained a centerpiece of Cohn’s collection for nearly 30 years, and he kept it in remarkably original condition excepting some upholstery work and cosmetic freshening along the way. Documents show that in 1976, Cohn sold the Locomobile to Mr. Sam Makhanian, also of Los Angeles. Makhanian was a loving custodian of this beautiful and significant Locomobile, and he took great care to carry on preserving its exceptional originality. 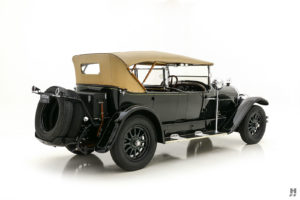 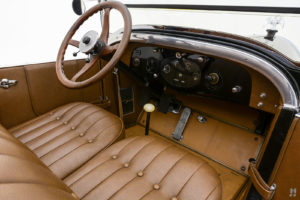 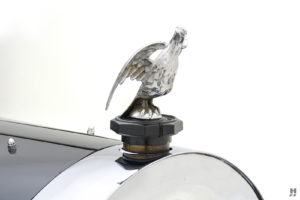