Stylish, distinctive and beautifully presented with a host of period accessories, this rare 6-55 Gold Bug is an outstanding example from this fascinating American marque.​

Our featured Kissel 6-55 Gold Bug Speedster is a fabulous example with well-known history from new; one of just a handful of survivors from this esoteric marque. This particular Gold Bug was originally purchased by Edwin Johnson of Crystal Falls, Michigan. Mr. Johnson was one of three brothers, all of which owned Kissels, though it was Edwin who chose the sportiest model. In 1925, Edwin, along with his brother Emil, collected his new car directly from the Kissel factory in Hartford, Wisconsin. The base 6-55 cost $1,795 to which Johnson specified a number of options including four wheel hydraulic brakes, wire wheels, Clymer pistol-grip spot lights, twin spares, wind-wings, and many other items to bring the price to a not-insignificant $2,305. The available rumble seat was eschewed by Edwin Johnson in favor of the sportier dual compartment turtleback trunk. Edwin Johnson was clearly quite fond of his Gold Bug, as he kept it for the next twenty-seven years.

Edwin Johnson reportedly sold the car in 1952 to a local car dealer for $200. The following year, it was purchased by Lawrence Wescott, also of Crystal Falls. In 1954, it was passed to Carl Arthur Johnson of Wabeno, Wisconsin who owned it through 1976. From 1976-1984 the Kissel was owned by Mrs. Mary Gillou before it joined the famous Imperial Palace collection from 1984-1988. After one additional short-term owner, it was purchased by the famed automotive artist and sculptor Stanley Wanlass in 1991. Finally, in 1994, the Kissel became a prized member of the most recent owner’s collection, who would commission the comprehensive, concours- quality restoration it wears today…………………………………………. 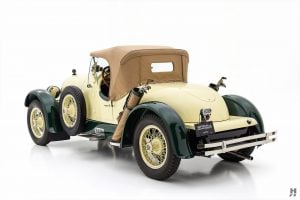 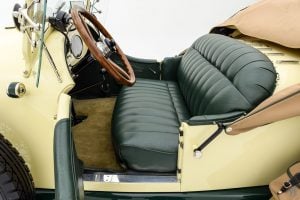 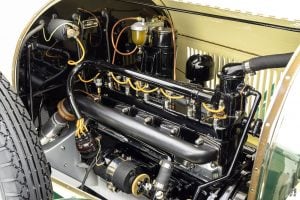