Wonderful one-off 5-passenger tourer coachwork by Grosvenor, with a recent cosmetic restoration in handsome colors. A fabulous tour car and a stalwart of the RROC, CCCA and AACA since the 1940s.

Given its remarkable quality, a Silver Ghost 40/50hp chassis would often outlive its original body. Similarly, as an owner’s tastes changed with the times, a body may be eschewed in favor of something newer and more fashionable. Our featured example, chassis 85TG (P-Series), is a rare exception in that it still wears its original five-passenger touring body by Grosvenor Carriage Co. of London. Grosvenor is best known for its close work with Vauxhall in the pre-war period, though they also supplied a handful of bodies for Daimler and Lanchester. It is not known if any other Rolls-Royces ever wore a Grosvenor body, but this is believed to be a one-off design. The coachwork is clean and charming with many interesting details such as the close-fitted wings, the low-slung body sides, dual windscreens and running board toolbox.

According to copies of the Schoellkopf card and RROC historical documents, 85TG was originally delivered wearing this Grosvenor coachwork through Padden Brothers, to a French artist named Maxwell Norman. Norman soon sold the car to his family physician, Dr. Chario who reportedly used the car in Capri for two years. After its time in the Italian sunshine, it was shipped to Long Island, New York and stored for some time before being acquired by Harold Priest of Gleasondale, Massachusetts. It then passed to F.R. Schreiter also of Massachusetts and in 1947, who then sold it to William Gregor of Flint, Michigan who drove 85TG home from New England and began a complete chassis, mechanical and cosmetic freshening. The car was enjoyed regularly by Gregor in club events such as the AACA and RROC, then stored until 1960 when it was acquired by Jack Skaff, another Flint local. Mr. Skaff sold the car to Calvin T. Zahn of Ann Arbor, Michigan; an avid enthusiast and collector of important early motorcars. With Mr. Zahn, the Ghost found a long term home and was cherished by his family for the next 57 years. 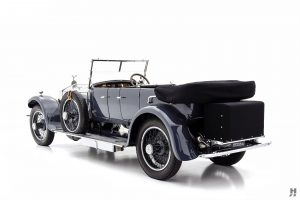 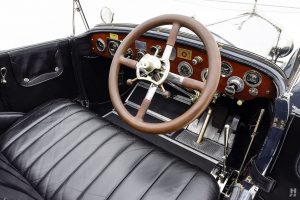