This 1920 Stutz Series H roadster is an attractive example recently out of a large, eclectic collection of historically important sports cars. As the only known Series H Roadster registered with the Stutz Club, it is rarer than even the storied Bearcat. Finished in appropriately sporty red with black fenders, it is pleasingly presented and in good mechanical condition. The early history of this car is not currently known, however, it did spend some time the world-famous Harrah Collection before being sold at their 1978 auction following Mr. Harrah’s death. The Stutz was purchased that day by James McCloud of Piedmont, California who soon embarked on a long term restoration which is documented in a fastidiously kept hand-written log. The restoration continued into the 1980s, and Mr. McCloud retained his treasured Stutz until 1996 when it was sold it to another California collector. In 2003, it was acquired by the most recent owner. The car was in very good condition when he acquired it, and while a concours restoration was briefly considered, he found the Series H was such an enjoyable car as is, that he put on approximately 500 miles a year and simply maintained it as needed.

Today, the Stutz remains in very tidy condition, with the older restoration having held up quite well, benefiting from some freshening and expert maintenance during its tenure with the last owner. The paint work is very good overall, with nice quality finish on the black fenders and a red body, wheels and chassis. A few minor blemishes can be found in the paint that are consistent with the age of the restoration, and the car remains quite attractive. The two-place cockpit is trimmed in brown upholstery which is in good order along with the black carpet, a tan canvas top, and excellent nickel-plated switches and controls…………………. 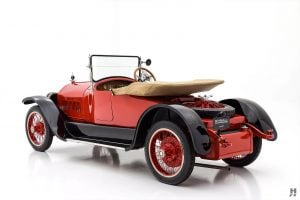 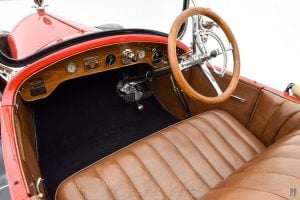 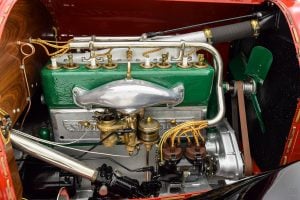