This breathtaking 1911 Pope-Hartford Model W Portola Roadster is a stunning example of Brass Era performance motoring, exquisitely restored by the respected Stu Laidlaw of Redding, Connecticut. Finished in gleaming black with burgundy coach stripes, this Pope is truly stunning in every respect; an imposing machine with incredible presence. Little is known of its earliest history, though it is understood that this Model W resided in the Harrah collection in the 1970s, before it was sold and restored in the 1980s, eventually joining the collection of well-known Brass Era collector Dick King. It is believed the body is a reconstruction of the original, built atop a genuine Portola engine and chassis. After its time with Dick King, the Pope-Hartford was passed to another passionate brass-era enthusiast who continued to show and enjoy the car as it deserved.

Still appearing fresh and impeccably detailed, the black bodywork is finished to concours-quality standards, with outstanding paintwork on the chassis and body components. The wooden cowl boards are exquisitely finished, like fine antique furniture. The frame-mounted fuel tanks and gloss black patent-leather skirts between the body and running boards help give the Pope its low-slung appearance – despite those massive 36” wheels. Accessories include Pope-Hartford branded Gray & Davis headlamps, Gray & Davis cowl lamps and numerous beautifully restored brass fittings. Instrumentation is via a Warner speedometer and clock, while a separate gauge monitors fuel pressure, which is boosted via a hand pump between the seats. Running boards and floors are finished in period appropriate linoleum panels, and the seats are beautifully trimmed in black leather showing virtually no signs of use since the restoration was completed in 2011. The sale will include both the jump-seat rear deck as well as the spare-wheel carrier, which can be changed over for the full road-racer effect. 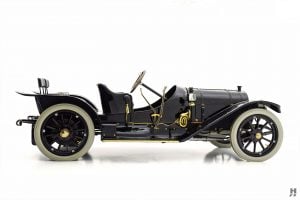 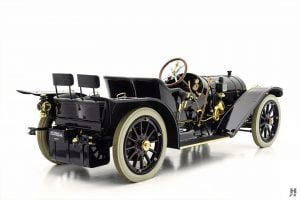 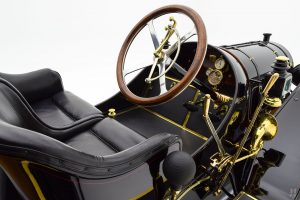 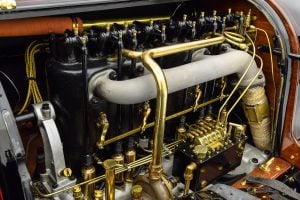