A rare and charming runabout from the first official year of Waverley production. Recently restored and ready for enjoyment. One of the earliest examples from this pioneering electric car company.​

By 1908, A.A. Pope’s vast business empire was beginning to falter and he sold off a great number of his interests, including Pope-Waverley Electric. A group of Indianapolis businessmen purchased the business and continued production as Waverley Co. They offered much of the same range, soon adding a model with a faux bonnet to resemble a petrol-powered car. Production lasted until about 1916, coinciding with the time electrics fell out of favor with consumers thanks to competition from self-starting petrol cars, which offered greater range and performance as well as ease of refueling. But Waverley’s legacy lives on in today’s high-tech full electric and plug-in hybrids, as we see electric cars coming full circle, well over a century later.

This charming Waverley Electric runabout is a very early example from the first known year of Waverley motorcar production in 1901. Starting with a complete and very sound original example, it has recently been treated to a careful cosmetic restoration and now presents in beautiful condition with fresh Brewster Green paint on the body, chassis, wings and wheels, with hand-painted coach stripes in contrasting red. It is the most basic of early automobiles, with simple tiller controls, and room for two atop a carriage chassis with the electric motor mounted centrally below the body.

Now well over a century old, this lovely motorcar is beautifully presented with glossy paint and freshly polished nickel plating on the tiller controls, coach lamps, and wheel hubs. Wood features heavily in the construction of the body, all of which was remarkably sound prior to restoration and now presents in excellent condition. It has been mechanically (and electrically) sorted and is quite enjoyable to drive while perched atop the freshly upholstered seat. 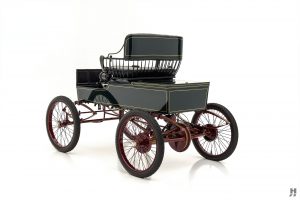 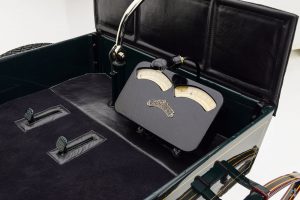 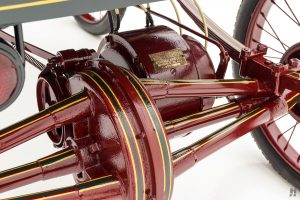